All my paintings are for sale!
…even if I am having a hard time doing so, as I am in LOVE with my paintings.
Sexy girl painted by one 😉
Also visit my BWilder ARTS Homepage to see more:
BWilderArt

Watch the VIDEO of her getting created!

One of my favorite paintings.
When I was painting her my life was as colorful as she is. It was a hot summer and I watched the parrots in Pasadena.
I still love looking at the colors and I love the relationship between her, the parrots and the observer.
She is my brightly eye-catcher of my apartment. I think I even saw her wink at me sometimes. 😉

Watch the VIDEO of her getting created!

I hate to let her go but I will give her to the right buyer.
If you having interest in welcome her in your home/viewing room, contact me
BWilder@BWilder.US

She
Oil and Tabasco on Wood
550 US Dollars

She is definitely my spicy girl. To me she seems confident and balanced. Though so much life is written in her face. When I look at her, I am asking myself: “Where does she come from? What has she been through?”
I can see the strength in her eyes and I love watching her when I am lounging on the sofa.

When I finished painting her, I knew there was something missing. I thought about it for a minute and than I remembered the warm, orange color of tabasco. This spice made her what she is today. A hot woman taking her moment with the harsh hills surrounding her.

If you having interest in welcome her in your home, contact me:
BWilder@BWilder.US 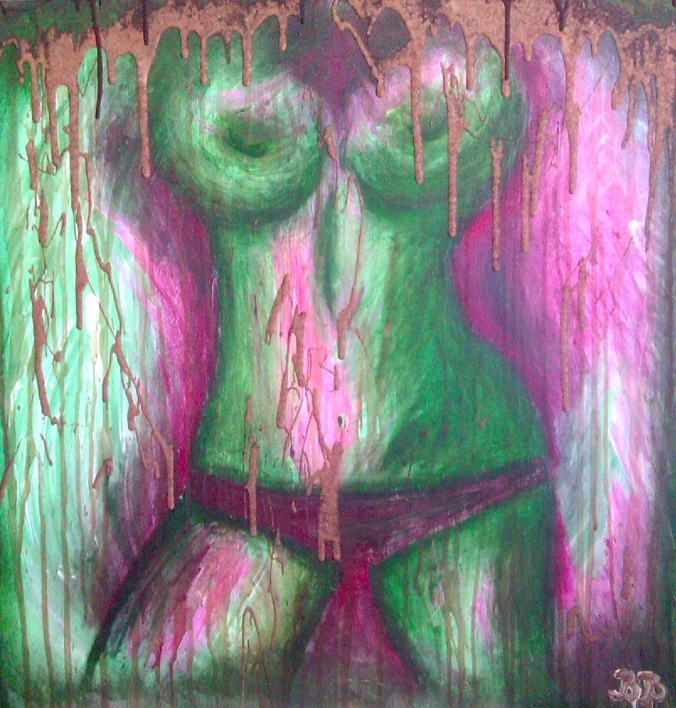 Yummy
Oil and Chocolate on Wood
400 US Dollars

I don’t know what you think but I always got quiet hungry looking at her.
Definitely a sweet decoration.
She hangs next to my kitchen entrance and definitely inspires me to cook some desert.
Sexy body curves and chocolate. What better combination could there be?

I loved looking at her in my bedroom.
She reminds me on the beautiful days and nights on the beach, one of my favorite places.
Life is easy with toes in the sand and the ocean seems to wipe away all the unimportant obligations waiting for us in the office.
May life be an endlessly beach.

She is my confident, strong girl and I hope you appreciate her appearance at your place as much as I did at mine.
If you having interest in welcome her in your home, contact me
BWilder@BWilder.US

Coyotes. They are, aren’t they?
I do not know, if they are in an accepting knowledge that the coyotes are watching them or if they are coyotes themselves. Seems just like another night on the Hollywood Hills.
I have no reasonable explanation for this painting…it happened by itself on a lonely, chilly evening.
You know, there is always the point, where the painting takes over and you have no idea anymore how you even got here…
The mud I used to give the painting even some structure comes from the dead sea.

I painted this sexy girl in fall 2012, right after spending a lot of time in Malibu.
She is a sexy decoration of my apartment.
She keeps my living room seem sunny, even on cloudy days.
It’s good to know, there are always sun and ocean waiting.

It’s heartbreaking to sell her but I want her to bring joy in your home too!

Oil on Cotton
600 US Dollars

Aphrodite, the Greek goddess of love and beauty. The Romans called her Venus. There are a few myths regarding her birth. This is the most common one.

Hesiod, Theogony 176 ff (trans. Evelyn-White) (Greek epic C8th or 7th B.C.) :
“Ouranos (the Sky) came, bringing on night and longing for love, and he lay about Gaia (the Earth) spreading himself full upon her. Then the son [Kronos] from his ambush stretched forth his left hand and in his right took the great long sickle with jagged teeth, and swiftly lopped off his own father’s members and cast them away to fall behind him . . . and so soon as he had cut off the members with flint and cast them from the land into the surging sea, they were swept away over the main a long time: and a white foam spread around them from the immortal flesh, and in it there grew a maiden. First she drew near holy Kythera, and from there, afterwards, she came to sea-girt Kypros, and came forth an awful and lovely goddess, and grass grew up about her beneath her shapely feet. Her gods and men call Aphrodite, and Aphrogeneia (the foam-born) because she grew amid the foam, and well-crowned (eustephanos) Kythereia because she reached Kythera, and Kyprogenes because she was born in billowy Kypros, and Philommedes (Genital-Loving) because sprang from the members. And with her went Eros (Love), and comely Himeros (Desire) followed her at her birth at the first and as she went into the assembly of the gods. This honour she has from the beginning, and this is the portion allotted to her amongst men and undying gods,–the whisperings of maidens and smiles and deceits with sweet delight and love and graciousness.”